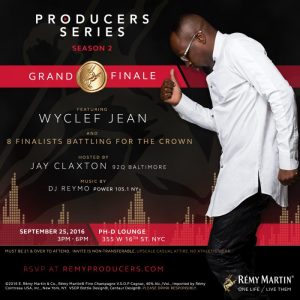 Remy Martin’s Season 2 Producers Series will end with its Grand Finale to be held on September 25, 2016.  The event will be hosted by Charlamagne The God and feature Wyclef Jean at PH-D Rooftop Lounge.

The Producers Series” featured some of the hottest producers in the game: legends and trend setters.  The first two NYC-qualifiers featured DJ Premiere (@ La Marina) and Wyclef Jean (@Tao Downtown). While the competition series has not limited producers from other cities from submitting tracks for consideration and competition at the New York City qualifiers, Rémy Martin felt it important to open up the program into new markets in order to give local talent to shine on a national platform.